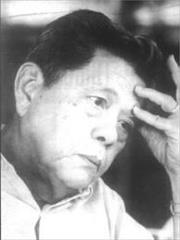 As someone who suffered as much as he did for his country, no one would perhaps have begrudged him the flight--out of the country.  It speaks so much of the character of the man that he stayed.  And that in staying, he persevered.  And that in persevering, he fought.  And, that in fighting, he led.  And that in leading, he inspired.

In those dark days when law was strangled by a dictator's mailed fist, no matter that it would often be cast in a velvet glove, he stayed, fought, led, and inspired.

When the idea of rights was aspirational and the idea of fighting for one's rights, let alone those of others, was unpopular because they proved literally hazardous to one's health, if not continued existence, he stood firm and held fast.  When the idea of law was simply what the dictator willed and the rule of law was his signature on a piece of paper, he, and a handful of others, dared say to the face of the dictator that such a perversion of law was not acceptable and that when the law becomes meaningless and itself oppressive, then the people are justified to looking beyond the law to claim their rights.

When many of the nameless, faceless among us suffered the same lot he did, and worse--to be accused wrongly, to be charged falsely, to be detained indefinitely, or simply to be rendered literally gone, without anyone to raise a hue and a cry--he grieved in solidarity, for he (and his family) knew of that pain, that suffering;  but his grief did not allow him the luxury of inaction, instead it spurred him to action.

Together with his old friend and comrade Tanny, one who also stayed, he would fight for those who, unlike him, had no pedigree; he would give voice to those whose voices were suppressed momentarily or stilled forever.  He and Tanny (and another named Joker) would bring together other like-minded spirits and brave-hearted souls to say loudly to the dictator "NO!" when all around the dictator, his sycophants were whispering sibilant yesses.

He would fight with what he had, what he knew, and what he held dear:  the law that he learned at his father's library and by his father's side, the intellect that was given to him by his Creator, the love of country that was innate in him, the sense of justice that he himself was deprived of by the dictator and the support of family, friends, comrades and kindred souls who never left him.  Against the devices of the dictator, they were not much but they were enough.

He would speak, over and over again, of law, of development, of sovereignty, of peace, justice, of change and of hope--everywhere he felt he could make a difference.  In that deep gravelly voice with a distinct diction, he would also teach. He would teach lawyers, law students and members of the basic sectors; he would talk about paralegalism, about a new kind of lawyering which he would call "Developmental Legal Aid", he would teach people to be aware of their rights, to be aware of their situation; he would teach people that their right to self-determination would bring with it the right to hope because change would come only when those who desperately need change desire it equally desperately.  For many people, lawyers, law students and ordinary people oppressed by the dictator's "rule of law", he would change the way that people saw the law, their rights and their country.

Memorably, he would sum up what filipinos were fighting for in his inimitable turn of phrase, "to sing our own songs."

He would also speak of what it took to be good citizens, to be good people and of the country's need for these. In one of his many letters to his children, he would say:

"...the truth remains true that never have our people had greater need than today for great lawyers, and for young men and women determined to be great lawyers.

Great lawyers–not brilliant lawyers. A scoundrel may be, and often is, brilliant; and the greater the scoundrel, the more brilliant the lawyer. But only a good man can become a great lawyer: for only a man who understands the weaknesses of men because he has conquered them in himself; who has the courage to pursue his ideals though he knows them to be unattainable; who tempers his conviction with respect for those of others because he realizes he may be mistaken; who deals honorably and fairly with all, because to do otherwise would diminish him as well as them–only such a man would so command respect that he could persuade and need never resort to force. Only such a man could become a great lawyer. Otherwise, “what you are speaks so loudly, cannot hear what you say.”

For men and women of this kind, our country will always have need–and now more than ever. True, there is little that men of goodwill can do now to end the madness that holds our nation in its grip. But we can,even now, scrutinize our past; try to pinpoint where we went wrong; determine what led to this madness and what nurtured it; and how, when it ends, we can make sure that it need never happen again.

For this madness must end–if not in my lifetime, at least in yours. We Filipinos are proverbially patient, but we are also infinitely tough and ingeniously resourceful. Our entire history as a people has been a quest for freedom and dignity; and we will not be denied our dreams.

So this madness will end; the rule of force will yield to the rule of law. Then the country will need its great lawyers, its great engineers,its great economists and managers, the best of its men and women to clear the shambles and restore the foundations of that noble and truly Filipino society for which our forefathers fought, bled and died."

And when the madness did end and change did come on that day that the dictator fled, he was, deservedly, among those feted and hailed for bringing freedom back. And, perhaps, because of all that he had done, many would not have begrudged him the luxury of no longer fighting, no longer leading, no longer persevering, no longer inspiring.

And so he did. Tasked with heading the first Human Rights Commission in the country and with leading the peace talks, he could not keep silent in the face of all that was wrong;  when barely a year into the new government, the democratic space that he and others had fought for constricted into a death grip with the massacre of farmers marching towards the palace of the president he helped put into power, he knew he could not keep his peace.  And so he "walked his talk" and left a government that could not walk its talk.

Less than a month after, cancer would claim him, a day after his 65th birthday and two days after the first anniversary of the revolution he helped inspire.  His voice would be stilled but his visions of law, of justice, of development, of sovereignty, of helping, of hoping would live on--in many iterations and incarnations of the small band of lawyers and paralegals he first trained, formed and inspired.

I met him only once but my memory of that meeting remains. I had been asked by someone (I do not remember anymore who) to bring a document to him at his residence (the famous 55); I was in my first year of law school and largely indifferent to staying on;  but of course, I had heard of him and read of him (I had read his letter to his son) but I had never met him.  I dutifully went to his residence and when admitted, saw him and his wife (Ka Nena, of whom I have fond memories as well, who often greeted me, as she did that day, with "kumain ka na ba?" ["have you eaten?"]);  I do not think I even introduced myself, so uncertain was I of how I was supposed to comport myself;  I remember handing him the document and being greeted with a smile and a "thank you." And I remember being asked what I did and when I said I was in law school, being greeted once again with that smile and a conspiratorial, "good."

Revolutions are waged and won not only because numbers are superior or voices are louder but because there are people who stay on, who persevere, fight, lead and inspire.

To one who inspired, fought, led, persevered and, most importantly, stayed--Faithful, Fearless and Filipino-- to the very end. Jose W. Diokno, "Ka Pepe", on his 90th birthyear, on the 25th year since his passing.
Posted by Ted Te No comments:
Email ThisBlogThis!Share to TwitterShare to FacebookShare to Pinterest
Labels: Jose W. Diokno
Newer Posts Older Posts Home
Subscribe to: Posts (Atom)

The Word for Today