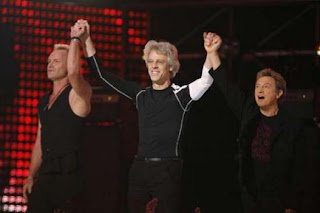 Opening the Grammy's yesterday and confirming a reunion tour this year, Sting, Stewart Copeland and Andy Summers, better known as The Police, finally played together after 4 years.

I am pretty sure that the tour won't reach my neck of the woods and should it, by a miracle, reach these shores, it will certainly cost both arms and legs. Well, there's always the CD.
Posted by Ted No comments:
Email ThisBlogThis!Share to TwitterShare to FacebookShare to Pinterest
Labels: good stuff

You know we're really in trouble when. . .

1. You find yourself agreeing with Prospero Pichay about the need for principled politics.
2. You find yourself agreeing with Kit Tatad on the need for moral recovery.
3. The spectacle of Gloria Arroyo tonelessly and tastelessly "singing" (sic) Boom Tarat tarat is not enough to move people to revolt.
Posted by Ted 2 comments:
Email ThisBlogThis!Share to TwitterShare to FacebookShare to Pinterest
Labels: commentary, politics, unfunny events

On December 7, 2000, a distinguished member of the House of Representatives stood up in the Halls of the Philippine Senate and declared that "we cannot have a country run by a thief." That member of the House was Joker Arroyo, who later rode his participation as a prosecutor in the impeachment trial of Joseph Ejercito Estrada to a Senate seat in the elections of 2001.

Yesterday, Joker P. Arroyo filed his certificate of candidacy as senator under the administration ticket of Gloria Arroyo, who is widely suspected of stealing, if not money directly, then at least the elections of 2004.

Sir, seven years ago, you said this: "We cannot have a country run by a thief."

This may be a bit old but just have to say this.

I am on record as not being a big fan of Alan Cayetano--I think he's too glib for his own good and he's a bit shallow on the issues--but after the House Ethics (sic) Committee decided to recommend a 45-day suspension on him for failing to prove the expose he made against the Arroyo men (Mike, Mikee, Iggy and Dato) and the Arroyo woman (who else?), I am pretty sure that he's going to place highly in the Senate race.

And he has the Arroyos to thank for that; how's that for poetic justice?
Posted by Ted No comments:
Email ThisBlogThis!Share to TwitterShare to FacebookShare to Pinterest
Labels: commentary, politics, unfunny events

Why is MVP not smiling?

We waited for this?

After what seemed like an eternity in this basketball-crazed country, the “leaders” of the governing bodies of basketball in the tell us that they finally have unity and they call themselves by the very original name --"BAP-SBP." And all the usual suspects are still onboard---Lim, Alentajan, Tan—the very same ones who threw a spanner in the works by their selfish, boorish, arrogant, and totally un-Filipino (what am I talking about, Graham Lim isn’t Filipino) machinations; plus a few more—Villafuerte (remember Con-Ass?), Cagas (remember Con-Ass?)—now if they had gotten Lagman and Jaraula on board, they could have sung “hail, hail, the gang’s all here!” But I digress, this is basketball, not politics--although sometimes you can't tell the difference anymore.

What is going on?

After the so-called Basketball Association of the Philippines (BAP), through its self-proclaimed “leaders” Lim, Alentajan and Tan, manage to pull off one of the most cruel stunts anyone could ever think of in this basketball-crazy country—getting us suspended from international competition—the SBP led by Manny V. Pangilinan agree on “unity” with this group. And they’re happy about it?

I don’t know about you—but it’s no longer only in that something figuratively stinks. Right here, right now, this stinks—it stinks big time.

What, the BAP is not even going to be held accountable for costing the country its best shot at an Olympic berth? What, the BAP is not even going to be taken to task for throwing back the calendar for ASEAN supremacy (alright, second place supremacy after , which is light years away from where we are)? What, Alentajan and Lim are not going to be even "slapped on the wrist" for causing us all this trouble and this expense just so that we can play basketball internationally? What, we’re just going to allow this sell-out and even allow the BAP first billing in this “new” federation?

Can the saner voices in Philippine basketball do something please? ? Joe Lipa? Please don’t allow this sell-out to take place.

Sure, let's unite but let's unite all those who have a legitimate stake in basketball--Alentajan and Lim have none, they're only looking to advance their own personal interests. Unity, yes definitely, but not at all costs. Not at this cost.

I am this close to switching to another sport—perhaps cricket might make more sense (despite all its weird rules)—than basketball under this "new" BAP-SPB alliance.
Posted by Ted 2 comments:
Email ThisBlogThis!Share to TwitterShare to FacebookShare to Pinterest
Labels: commentary, politics, rants, sports, unfunny events

I should be in Paris now for this (I attended the 2nd one in Montreal in 2004) but two very dear friends are getting married next week and had to choose between the two events - Paris in February (!) or Manila.

It's a no brainer and obviously no contest!
Posted by Ted 2 comments:
Email ThisBlogThis!Share to TwitterShare to FacebookShare to Pinterest
Labels: death penalty, random

Newsbreak, a news magazine I've read consistently since its very first issue six years ago, recently stopped publishing a hard-copy edition and decided to continue existing only in its online format. I've had the privilege of contributing a few pieces before to its hard-copy edition and am happy to say that I've been asked to contribute as well to its online edition in a more regular capacity.

I'm sad to see the hard-copy edition go because it represented a good way to encourage reading something where you needed to turn pages; Newsbreak became known very quickly for its excellent writing and comprehensive research as well as its integrity; the women and men behind Newsbreak were award-winners in their own right and putting them together, they formed a formidable team.

However, the realities of publishing a hard-copy edition in a very competitive market has taken its toll. Add to that Newsbreak's terminal propensity for telling the truth, as it is, and for offending the wrong persons--like Mike Arroyo and Gloria Arroyo--and you have a surefire combination for not attracting enough advertisers or business.

I'm happy for small blessings, however; and the continuation of Newsbreak as an online magazine is a blessing. In this world where truth is scarce and fearless reportage of the truth is even more scarce, the women and men of Newsbreak is a gust of wind that is welcome indeed.
Posted by Ted No comments:
Email ThisBlogThis!Share to TwitterShare to FacebookShare to Pinterest
Labels: commentary

I told her that I bother to write because I am but:

a
drop
falling into
a stream
flowing
into
a
river
raging,
becoming
torrents, and
turning into a
flood.

I told her also that I bother getting angry because:

the
flood reduces
the rock
into
rubble
in
time

And finally, I told her I bother caring because many years ago, one man cared enough to stretch out His arms wide in an unrequited gesture of absolute love and those outstretched arms have given us the right to dare to hope, to care, to dream, to perserverse, to share and to love back.
Posted by Ted 1 comment:
Email ThisBlogThis!Share to TwitterShare to FacebookShare to Pinterest
Labels: meditations
Newer Posts Older Posts Home
Subscribe to: Posts (Atom)

The Word for Today